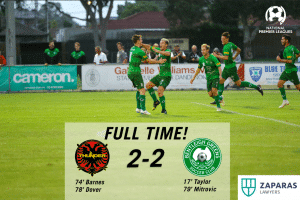 Bentleigh travelled to Dacland Stadium (George Andrews Reserve) in Dandenong on Saturday night for an enthralling encounter with Dandenong Thunder. The Greens started the match in fine form creating a barrage of chances in the first 10 minutes but couldn’t capitalise early on. Brandon Barnes had a good opportunity up the other end for Thunder with his effort smashing the upright after turning on the edge of the area. The game’s first goal came on 17 minutes when Brody Taylor snuck his header through a small opening and past Pierce Clark after a Matt Thurtell cut back. The Greens had the ascendancy early however had Goalkeeper Ryan Scott to thank for heading into the break with the lead. On 33 minutes he tipped another Brandon Barnes effort around his left hand post with an amazing diving save. 7 minutes later and Scott had a save of the season contender denying Barnes once again. Scott diving low to his left to deny the English striker for a 3rd time.

5 minutes after the restart Valentino Yuel had a penalty claim waved away after being brought down by Pierce Clark. On 57 minutes Brandon Barnes was denied by an inspired Scott once again and Valentino Yuel hit the post after a Bentleigh counter attack. On 74 minutes the Thunder’s persistence paid off with Barnes lashing a bullet past Scott on his left foot and sent the Thunder crowd into hysterics. 4 minutes later and ex-Greens attacker Kieran Dover put his new club into the lead after he put a rebound past a hapless Scott. Just a minute later and a frantic 5 minutes was over after substitute Velibor Mitrovic tapped home to set up a tense final 10 minutes. Both sides had their chances to clinch the game in the dying seconds with Matt Thurtell attempting a back heel to catch Pierce Clark unaware and Kieran Dover attempting a curling effort from 18 yards that flashed past Scott’s far upright. The entertaining match finished 2-2 with coach John Anastasiadis describing the point as “a good result”. “Thunder is a hard place to come and given the circumstances of the match, we’ll take a point.”

Bentleigh return home next Friday night to take on local rival Oakleigh Cannons in the derby. Kick off from Kingston Heath Soccer Complex is at 8:15pm.