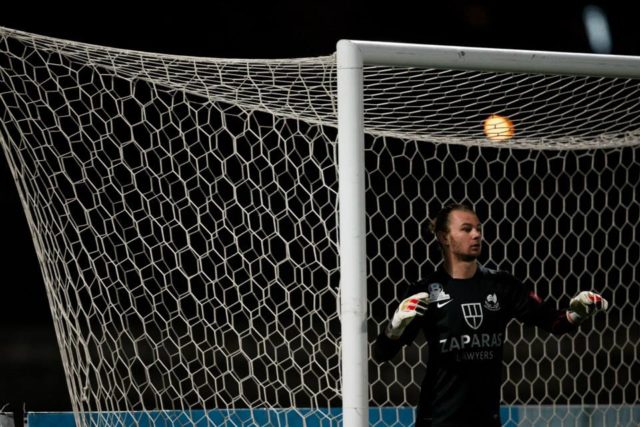 Bentleigh Greens SC is delighted by the news that former goalkeeper Alastair Bray has agreed terms with the Central Coast Mariners and in doing so fulfilled a dream of playing in the Hyundai A-League.

The 22-year-old arrived at Kingston Heath in the beginning of 2013 on the back of his first National Youth League season with Melbourne Heart, having previously featured in between the sticks for FC Bulleen Lions where he first caught the eye of Greens coaching hierarchy.

Initially signed on as deputy to the experienced Stuart Webster, Bray surprised many with some good early season form as the Greens went agonisingly close to claiming championship honours, losing a memorable Grand Final 3-2 to Northcote City.

By the following season, Bray had deposed Webster as the Greens’ number one custodian and was instrumental in the Club’s memorable run into the semi-finals of the Westfield FFA Cup, with the young shot-stopper producing many vital saves along the journey.

He continued this good form into the 2015 campaign where Bray’s eleven clean sheets and countless saves went along way to helping the Club claim their first NPL (VPL) Championship.

His impressive performances catapulted Bray into Olyroos selection and was rewarded with a call up to Aurelio Vidmar’s squad in late September.

Despite departing Kingston Heath at season’s end, Bray is still a fan favourite at Bentleigh, with his 60 league appearances over the course of three of the Club’s most successful seasons, etching him into Greens folklore.

“Alastair was a great servant of the Bentleigh Greens,” Anastasiadis said.

“He leaves us with a championship medal and was named Victorian Premier League U-21 player-of-the-year award in 2013 so we believe it’s the right time for him to step up into the A-League.

“He is a great kid and we believe he will be very successful in his new venture. We wish him all the best.”

Club CEO John Ioannou was full of praise for the A-League bound goalkeeper stating; “we had Alastair with us for three years and it’s about time he got picked up.”

“I kept telling him that he would get there and to just keep working hard as he is not just a good friend but also a great trainer with a great attitude.

“I always kept telling him and everyone else that he was the best goalkeeper in the National Premier League, well done Alastair and all the very best up in Gosford.”

The Club, its current playing squad, coaching staff and dedicated supporters all wish Bray the best as the shot-stopper seeks to establish himself at the Central Coast Mariners and subsequently at A-League level.