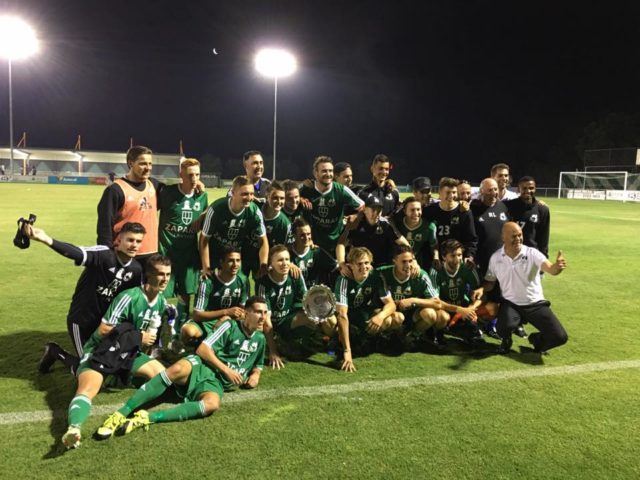 Bentleigh Greens have made a dream start to their season with a 3-0 win against rivals South Melbourne in the FFV Community Shield clash at Kingston Heath Soccer Complex on Friday night.

A timid opening 15 minute period saw half-chances fall to Wallace and Luke Adams at either end of the park before a late challenge by new South signing Marcus Schroen on Ruthven saw the former go into the book as a melee erupt between the two sides.

The best chance of the first half fell to new Greens striker Ryan Paczkowski in the 27th minute as 2015 Zagame’s State League 1 Golden Boot Winner was thwarted by a great save with the legs by Nikola Roganovic.

Chris Taylor’s men enjoyed the majority of possession in the opening 45 and ended the half strongly with opportunities arising to Epifano and Matt Theodore respectively.

Bentleigh came out of the interval on the front foot and were rewarded five minutes into the second period when a neat team move saw the ball fall to the feet of McCormick who finished promptly past a stranded Roganovic.

One quickly became two as a foul by South captain Michael Eager on his opposite number Wallace saw Ruthven presented with an opportunity to double the lead via a free kick from outside the area.

The midfielder stepped up and once again proved to be South’s nemesis with a brilliant effort flying into the top left corner of the net, sparking jubilation on the Greens bench.

The defending PS4 NPL Premiers had gone into the contest without three-time Golden Boot Winner Milos Lujic and his absence left Taylor with no other options than to play 17 year-old playmaker Andy Kecojevic up front.

The teenager was denied from halving the deficit by the superb reflexes of Greens custodian Ryan Scott who twice denied him from close range in what proved to be a decisive course of action.

Almost immediately up the other end, good hold-up play from Chris Lucas saw him tee up Wallace before the Englishman unleashed a shot which sailed past Roganovic to virtually end the contest.

South kept pushing in their attempts to pull a goal back with Brad Norton’s audacious attempt from range forcing Scott into an excellent save before Iqbal Jawadi’s low drive saw the 20 year-old into making another solid save.

Late drama saw another melee erupt with Wallace seeing yellow while Epifano was given his marching orders for lashing out at the Greens midfielder.