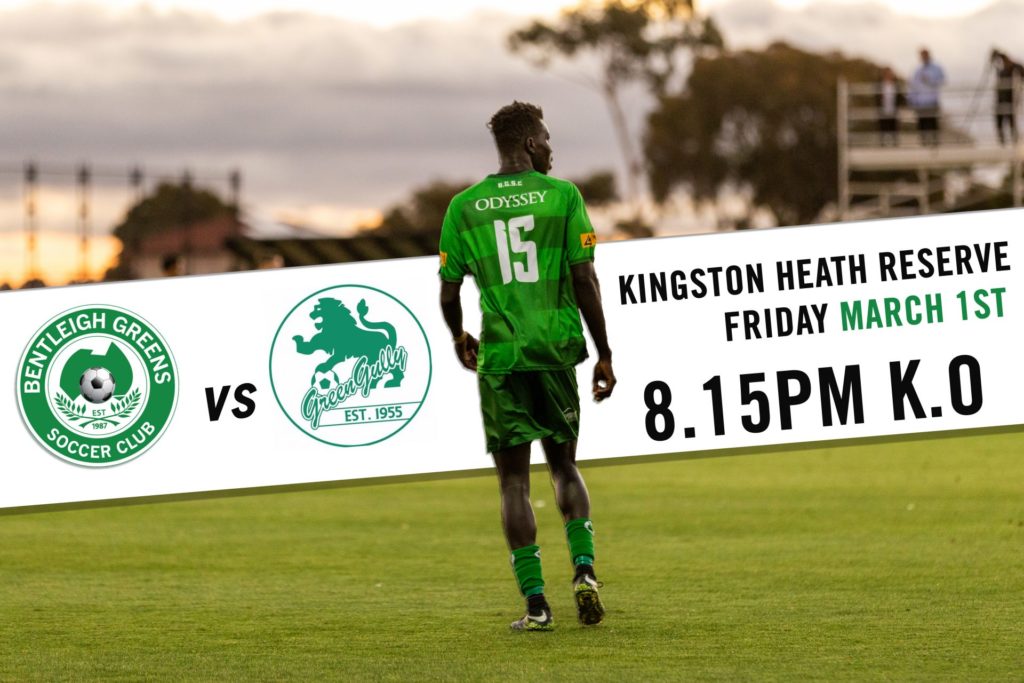 BENTLEIGH WILL AIM FOR THREE WINS IN A ROW WHEN THEY FACE GREEN GULLY AT KINGSTON HEATH ON FRIDAY NIGHT.

The Greens will be aiming to keep their good form going when they face Green Gully on Friday night at Kingston Heath Soccer Complex.

A 4-2 win over Pascoe Vale at CB Smith Reserve last Friday saw the Greens move to second spot on the ladder with six points from two league games.

The last time these sides met was back in round 22 of last season, with the Greens taking out a 2:0 win at Kingston Heath through goals by Matt Thurtell and Chris Lucas.

However, Green Gully will arrive at Kingston Heath in strong form, winning their opening two matches in the NPL – 1:0 at Altona and 4:2 against Heidelberg.

Bentleigh midfielder Tyson Holmes is not surprised by Green Gully’s strong start to the season, after the club finished 12th on the ladder last year.

“Every year Green Gully has a great squad so what happened last year means nothing. They are a completely new team with a new mindset and they’ll be ready to go. We’re looking forward to the challenge”.

Holmes appears to be ready to play after copping a knock to the ankle last Friday.

George Lambadaridis, who scored his maiden NPL goal for the Greens against Pascoe Vale will face his old team for the first time on Friday night.

Bentleigh will have to be wary of Green Gully attacker Matthew Fletcher, who scored twice in his team’s 4:2 win against Heidelberg.

Greens striker Matt Thurtell says it is important to keep the focus on every single game as the competition seems very even this year.

“There’s quite a few teams undefeated, which is good. We just take it as another game, we’ll work hard this week and are keen to get out there on Friday”.

Bentleigh will look to make it three straight wins in the NPL but it certainly won’t be an easy task against Green Gully who have the same goal in mind.