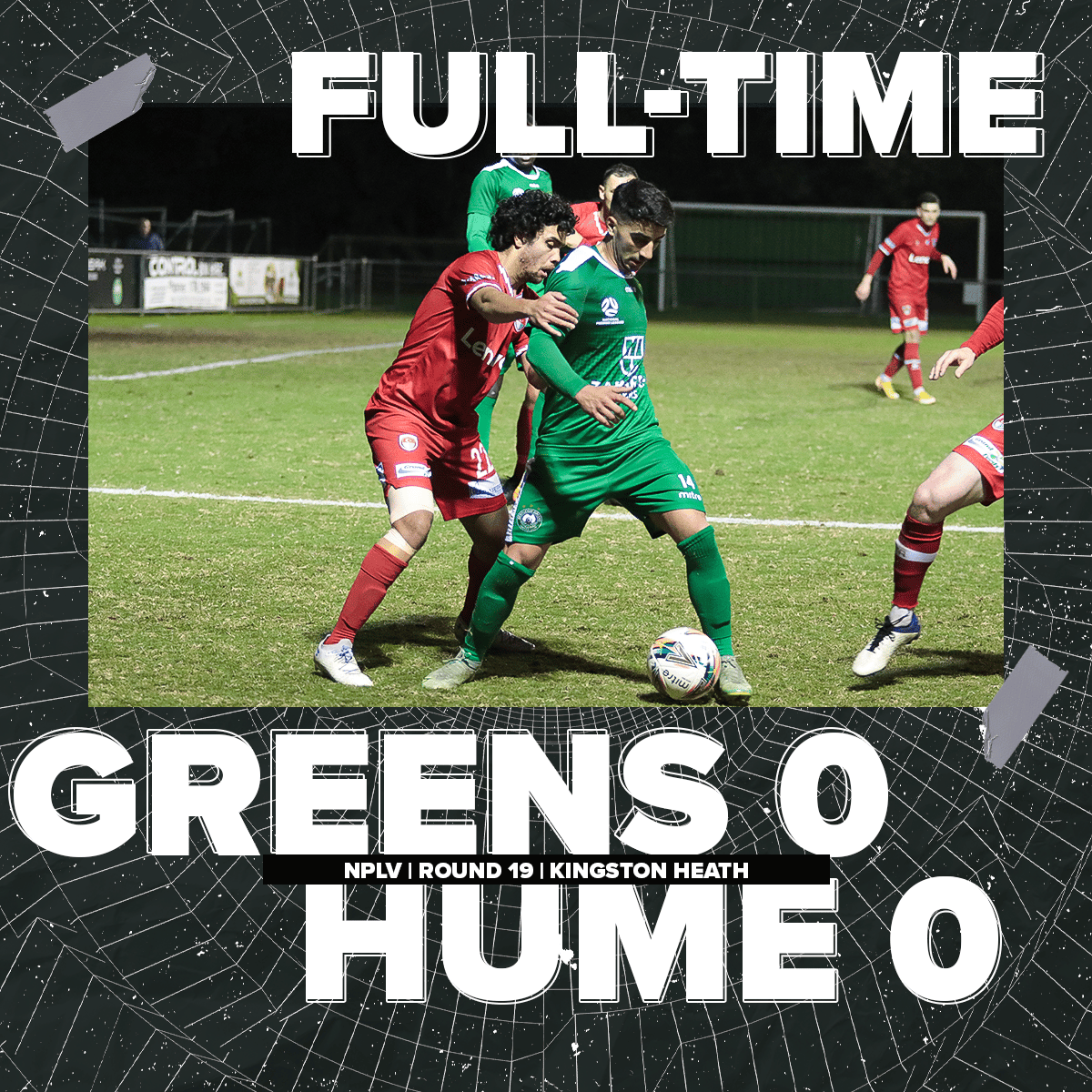 The Bentleigh Greens were once again held to a scoreless draw as they were left pondering what might have been in another dominant performance against Hume City.

The Greens enjoyed the vast majority of possession, hit the post and forced some smart saves from Rory Brian in the Hume City goal, but couldn’t find the back of the net in a second consecutive 0-0 draw.

Bentleigh took seven shots to Hume’s three, but in the end, it wasn’t enough as the Greens took just the point from the game.

The Greens’ first sight at goal came from a corner in the fourth minute, with Alexander’s driven corner into the near post creating a half-chance for Mitch Hore, who saw his shot well blocked.

Hore was back at it two minutes later, testing Brian with a well-struck curling effort, that curled just a bit too much towards the keeper.

Another corner from the Greens resulted in a Hume header on their own goal which was just narrowly over before the home side hit the post from the resulting corner. The Greens recycled possession well, working the ball back out to Alexander who whipped in another dangerous ball that Hume had to head back over their own goal.

George Lambadaridis hit a fierce shot on goal in the 31st minute but it was straight at Brian, who found himself incredibly busy in his first 30 minutes as a Hume City goalkeeper.

Kim struck one off-target after 34 minutes before Hume rushed the ball to the other end of the park and tested Pierce Clark for the first time with a curling effort on goal via Dixon.

Alexander was the latest from the Greens to sting the palms of Brian with a fierce shot from a narrow angle that the Hume keeper scouted well.

Nicholas Lazarides arguably had the best chance of the half when he was played through one-on-one, but he couldn’t find a way past the onrushing Clark, who read the situation brilliantly to deny the Hume attacker and ensure the half ended at 0-0.

It took five minutes for the Greens to test Brian in the second half, with Lucas Derrick flying in with a wonderful diving header to cap off some fine approach play, but once again his effort was straight at the shot-stopper.

Substitute Chris Droutsas came on off the park to instant effect in the 63rd minute, picking up a lovely switch of play and driving into the box with great positivity only to see his shot blocked.

Two minutes later, Derrick rifled in a low shot forcing Brian into a save low down to his right.

Ajak Riak had the best chance of the game in the 85th minute when he was beautifully found by a diagonal from deep. His first touch was good, but he couldn’t lift the ball over the onrushing Brian, who pounced on the effort on goal.

It was a chance that summed up the Greens’ night in front of goal as they just could not find a way past the Hume goalkeeper.

The Greens hit the road next week as they travel to Green Gully.