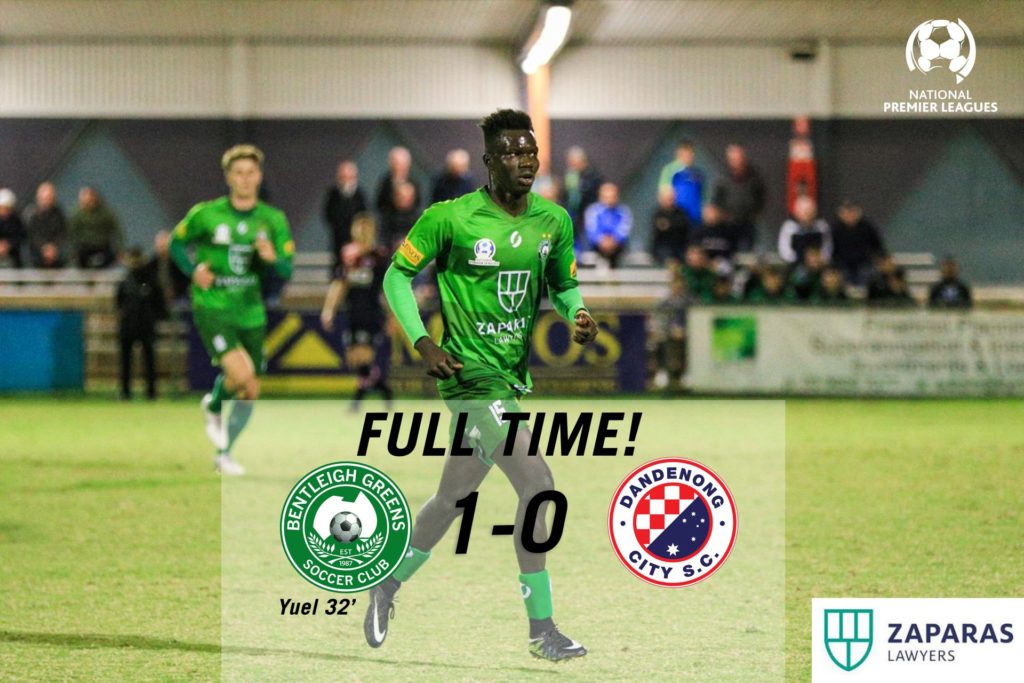 Bentleigh made it 2 wins from 2 games when they defeated Dandenong City at Kingston Heath on Friday night. City, whose squad boasted 9 ex-Greens players made it difficult for the hosts with their physical style of play halting Bentleigh’s attacking forays. City midfielder Liam McCormick picked up the game’s first yellow card in the 16th minute when he chopped down young Bentleigh defender Charlie Fry as he looked to play out of defence. On the 32nd minutes Bentleigh’s persistence paid off when Valentino Yuel breached Dandenong’s high-line and snuck in behind, he had no issue finessing his shot past City ‘keeper Kile Kennedy and off the inside of the left post and into the back of the net. The teams went into the sheds with Bentleigh leading 1-0.

The teams came out to start the 2nd half and the pitch had taken a battering of rain while the players were in during the break. The 2nd stanza saw both teams struggle to maintain possession of the ball. Bentleigh’s defence was in inspired form as it looked to grab a hold of its first clean sheet since round 5 when they defeated Hume City. The 62nd minute saw the introduction of Greens midfielder Josh Barresi who made his return from a foot injury which made him miss 6 weeks of Football. 5 minutes after his introduction Barresi had the opportunity to make it 2 from the Greens when was played through on goal but couldn’t beat Kennedy from close range. 10 minutes later the injury that kept him out for a large part of the 1st half of the season struck again when Barresi went down with another foot injury. Bentleigh had used all of their substitutes which meant they were defending a one goal advantage, a man down for the last 10 minutes of the match. The Greens defended valiantly and were able to hold off City’s attacks and hold on for a 1-0 victory.

Post match John Anastasiadis stated that the victory was one of the best he has been apart of since he joined the club. “There were so many things against us today, it was incredible. To get the result, against a really good team, it was a sensational result for the boys.”

The Greens are next in action when they take on Kingston City in the 6th round of FFA Cup qualifying next Tuesday at The Grange Reserve in Clayton. Kick-off at 7:30pm.