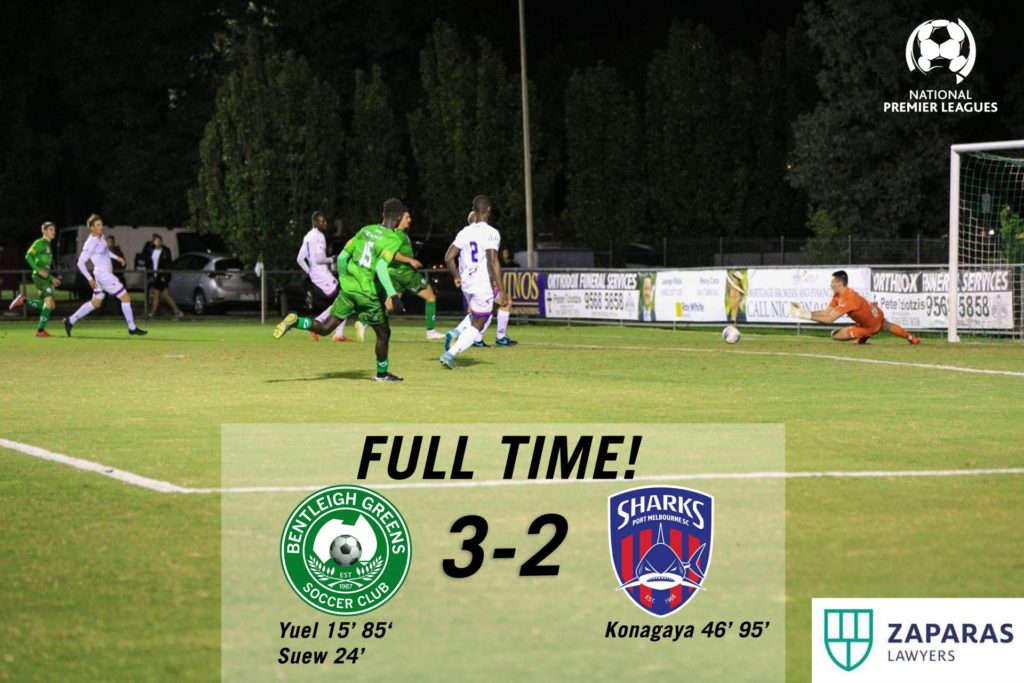 Bentleigh made it 3 on the trot as they defeated Port Melbourne 3-2 at Kingston Heath. In what was Head Coach John Anastasiadis’ last game at home before departing for new A-League franchise Western United, the Greens took control of the game early and never looked like relinquishing it. Valentino Yuel, as he usually does, got the Greens going in the 15th minute when he bundled the ball home after a speight of early pressure by the hosts. 9 minutes later and it was German-import Arnold Suew who shot the Greens to a 2-0 lead when his low drive from 20 yards beat a sprawling Matthew Symes and found the back of net. For Port, it was Japanese import Yuta Konagaya who had their best chance of the half when his free kick when agonisingly wide of Ryan Scott’s right hand upright.

Port got the ball rolling in the 2nd half and a minute after the restart they had found their life line when Konagaya’s shot caught Ryan Scott off guard and found its way into the back of the net. Port kept pushing for an equaliser but was met by an inspired Bentleigh defence who kept their chances minimal. In the 85th minute after sustained Port Melbourne pressure, Valentino Yuel charged down Symes who took too long on the ball looking to distribute from his own box and put the Greens into a 3-1 lead. in the 95th minute Port were handed a penalty which Konagaya converted, but by that stage it was too little too late as Bentleigh went on to record their 4th win in 10 days, and 3rd straight in the league.

Next up Bentleigh travel to Brunswick to take on the undefeated Avondale in a massive NPL Victoria clash next Saturday at the Calabria Club with kick off at 3:15pm.