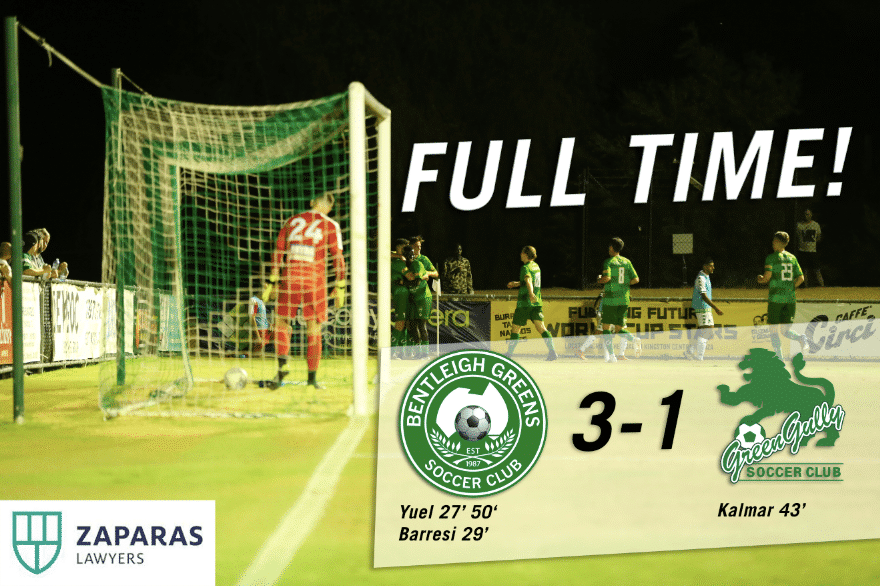 Bentleigh’s perfect start to the 2019 NPL season continued on Friday night as they overpowered Green Gully to claim a 3-1 victory at Kingston Heath.

In what head coach John Anastasiadis described as a “dominant performance” the Greens left their footprint on the game from the opening whistle, claiming the bulk of possession and looking the more dangerous side in the final third.

Star recruit Valentino Yuel who crossed from Adelaide City got the ball rolling in the 27th minute with a venomous drive that left Green Gully stopper Jerrad Tyson with no chance as his shot flew into the top corner from 20 yards. Less than 2 minutes later Matt Thurtell sliced Gully’s defense apart with a through ball which found ex-Gully man Josh Barresi who slotted home for his 3rd goal in 3 outings for his new team.

Just as Bentleigh appeared to be coasting Green Gully were given a controversial lifeline as Jeremy Walker lost his touch and managed to draw a foul out of the ref after running into a helpless Charlie Fry. Nick Kalmar made no mistake from the resulting free kick and beat Ryan Scott down low after his shot beat the wall and snuck into the bottom corner.

The sides went into the sheds at half time with the Greens leading 2-1.

Just 5 minutes into the 2nd half, Valentino Yuel grabbed his 2nd brace in 3 games and 4th of the season as he got on the end of a Velibor Mitrovic cross and made no mistake riffling his shot into the top of the net.

Gully’s only real chance of the 2nd half came late on as Alex Salmon wriggled and weaved through the Bentleigh lines making his way into the 18 yard box before shooting tamely at a waiting Ryan Scott who claimed easily.

Valentino Yuel almost had the chance to seal his hat-trick in the 86th minute as German recruit Arnold Suew looked to play him through but his ball was just too heavy for the on-rushing Yuel and found its way out for a goal kick.

The Greens proving too strong for Gully on a testing night where the temperature didn’t drop below 30 degrees.

The win means Bentleigh have started the season with 3 wins from 3 games and have a healthy goal difference early in the season.

Bentleigh will look to continue their strong run of form as they travel to Sunshine next Friday night to take on Melbourne Knights.