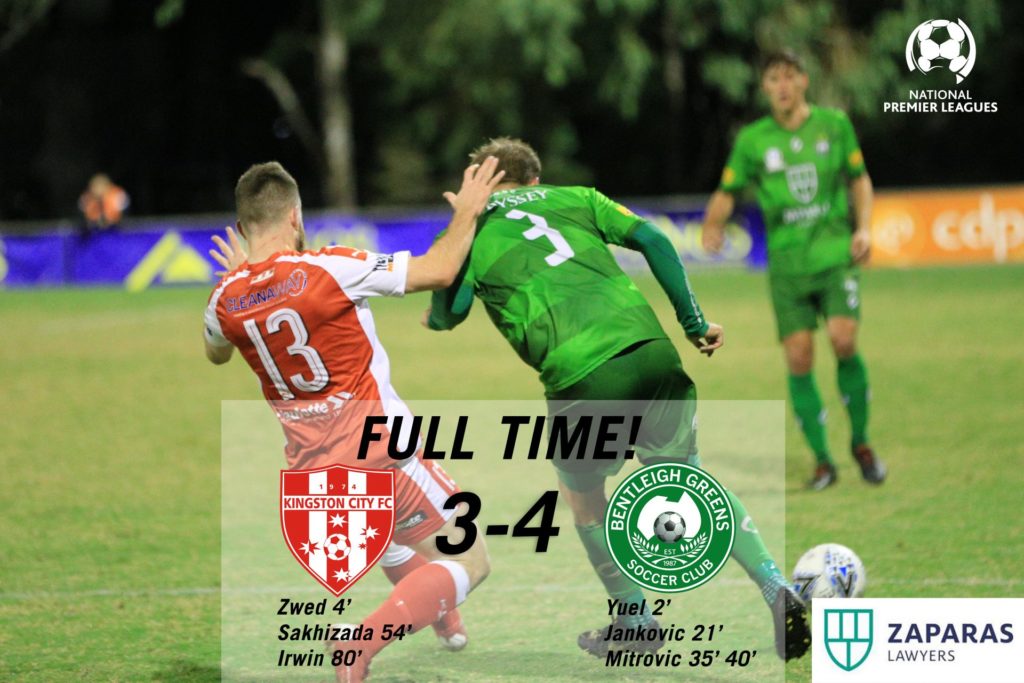 Bentleigh travelled to The Grange Reserve in Clayton South on Monday night searching for their first league win since their miracle win over Oakleigh in early April.

The Greens got the ball rolling in the 2nd minute when Valentino Yuel snuck his shot past Kingston stopper Stephen Hatzikourtis and into the near post. 2 minutes later and Kingston City found parity when Muad Zwed tapped in at the far post following good build up play from the hosts. On 21 minutes Bentleigh got their lead back when centre-half Marco Jankovic sweeped home from a scrappy corner. 14 minutes later and ex-Kingston winger Velibor Mitrovic got in on the act for the Greens when he got the decisive touch on a George Lambadaridis drive and sent the deflection past the ‘keeper for the Greens’ 3rd goal of the half. 5 minutes from the break, Mitrovic had his brace after getting into the box and wrong footing his marker before blazing his effort into the bottom right hand corner. Bentleigh went into the break with a commanding 4-1 lead.

In what was a tail of 2 halves, Kingston came out from the break and looked to claim the ascendancy. 9 minutes after the restart defender Faisal Sakhizada got on the end of a corner for the hosts and buried his header past Ryan Scott. On 67 minutes Mitrovic had the opportunity to claim his hat-trick but was denied by an on-rushing Hatzikourits. 10 minutes from time Kingston got themselves right back into the match when Chris Irwin was afforded too much space in the box and tapped home for the hosts. Kingston continued their barrage in hope of an equaliser but had Ryan Scott to contend with who was in inspired form for the Greens and his efforts ensured the Greens returned to Kingston Heath with all 3 points.

Bentleigh return home this Friday night to take on Dandenong City in another must win game for the club.