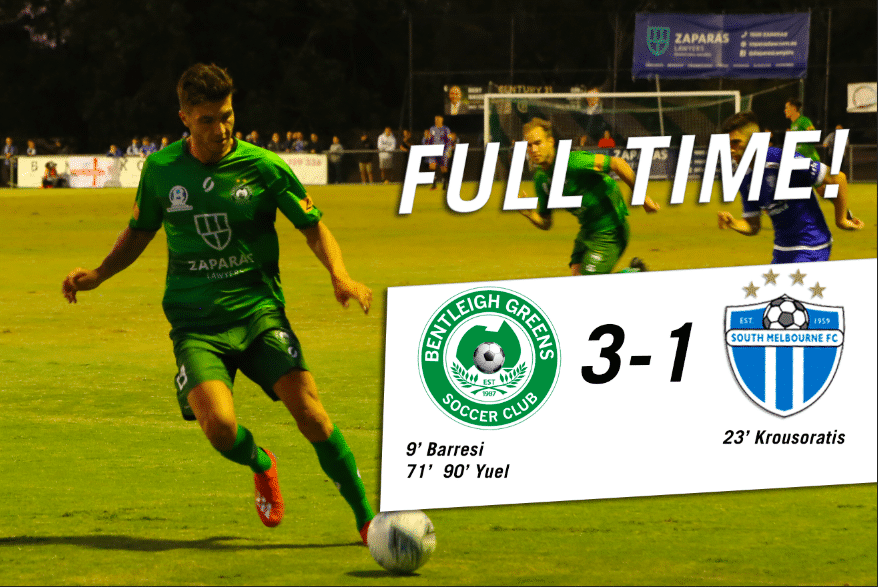 Following a strong pre-season which involved wins over West Adelaide and Altona Magic as well as a community shield triumph over Heidelberg United last Thursday night, the Greens were keen to put their best foot forward in the season opener.

A cagey opening saw both clubs trying to find their rhythm until Josh Barresi smashed the Greens in front after 9 minutes with a powerful drive from 20 yards into the bottom left corner, leaving South goalkeeper Nikola Roganovic with nothing to do except watch his shot fly past him.

23 minutes had passed when South found themselves an equaliser, a sloppy turnover in midfield led to Nick Krousoratis beating Ryan Scott at his near post for his first goal in South colours. The sides went into the sheds at half time with the scores level at 1-1.

The 2nd half was also a war of attrition until Valentino Yuel popped up with a brace, his first goal coming after 71 minutes. German debutant Arnold Suew went on a mazy run which started just inside South’s half, beating multiple South players before teeing up Yuel who calmly tapped in from 6 yards.

As the game went into added time, Bentleigh broke down the right in numbers which eventually led to Matt Thurtell finding Valentino Yuel who slotted past Roganovic and cemented a round 1 win for the Greens.

Post match Valentino Yuel stated “It was a tough game, (I’m) not going to lie… it was a team effort to get the 3 points that’s most important, I knew it was going to be a hard game. South Melbourne are one of the best teams here.”