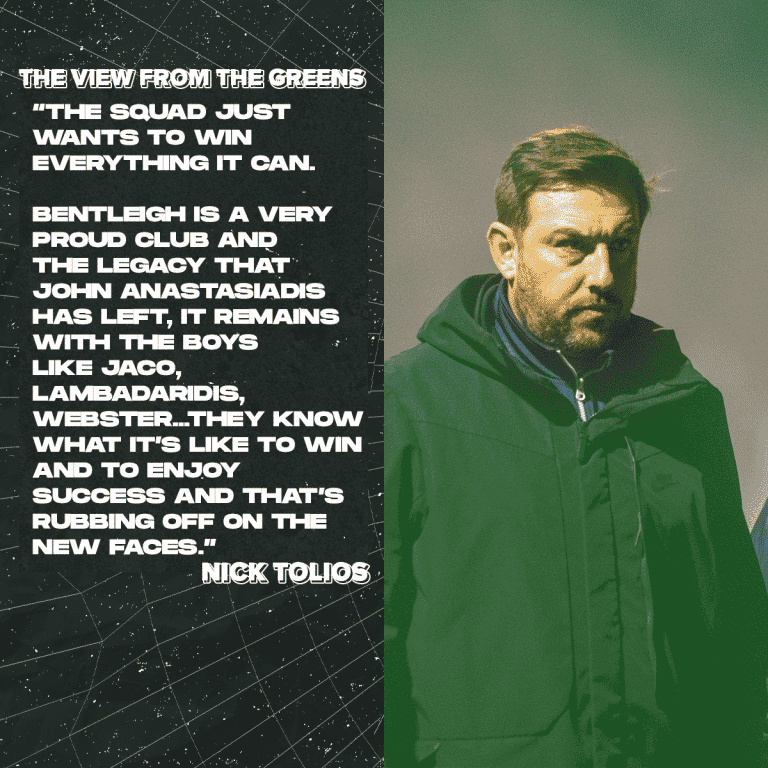 As the wind howled and the rain smashed down on George Andrews Reserve, the Bentleigh Greens found themselves 2-0 down against a spirited Dandenong Thunder side.

With the Thunder lacking motivation to chase balls sent flying over the fence, one man took on the role as ball boy, running all over Dandenong to fetch match balls.

The Greens’ young backup keeper’s relentless efforts to round up the balls on Saturday night did not go unnoticed, and coach Nick Tolios said it was the perfect example of the character within this squad that makes them so deserving of the opportunities they currently have to play in a Dockerty Cup final and the national rounds of the Australia Cup.

“This is a young kid, fighting to get some game time, but that’s the character he has and the commitment he has to our team and our cause. He was basically our ball boy, he was jumping fences to get the balls and running up and down the lines to stop time wasting.

“It’s the perfect show of character that’s within our squad at the moment, and I think it’s the sort of thing that shows why this group deserves to be fighting for silverware this year.”

Tolios was full of praise for the desire and commitment shown by all of his players against Thunder.

“With the conditions, it was a game of two halves. We battled the wind in the first half and struggled to get out, and the same applied to them in the second half,” he said.

“But they just never gave up. I thought young Maceo Jones was superb for the 60 minutes he played. Ken Krolicki was dominant in the middle and gave us the composure we needed.

“We rested some players, we had others out with niggles and knocks, [Lucas] Derrick missed out completely, so to see that response to the first half just fills me with pride as a coach.”

With another Australia Cup run on the cards, starting this Thursday at Kingston Heath against Broadmeadow Magic, Tolios said the Greens dressing room was brimming with confidence.

“The squad just wants to win everything we can,” he said.

“Bentleigh is a very proud club, and the legacy that John Anastasiadis has left, it remains with the boys like Jaco, Lambadaridis, Webster…they know what it’s like to win and to enjoy success, and that’s rubbing off on the new faces.”

Tolios reserves special praise in particular for Ajak Riak, who has endured a difficult year off the park.

“He’s rescued us a point tonight with two fantastic finishes, and I couldn’t be happier for him,” Tolios said.

“He’s had one of the toughest years of his career off the park, but he has been amazing for us and in particular over the last few years, so I was just so happy for him that he got those goals for us against Thunder.”

Tolios said his side was now focused on a positive result on Thursday night against Broadmeadow Magic in the Australia Cup.

Join us on Thursday night.

Get your tickets online HERE.