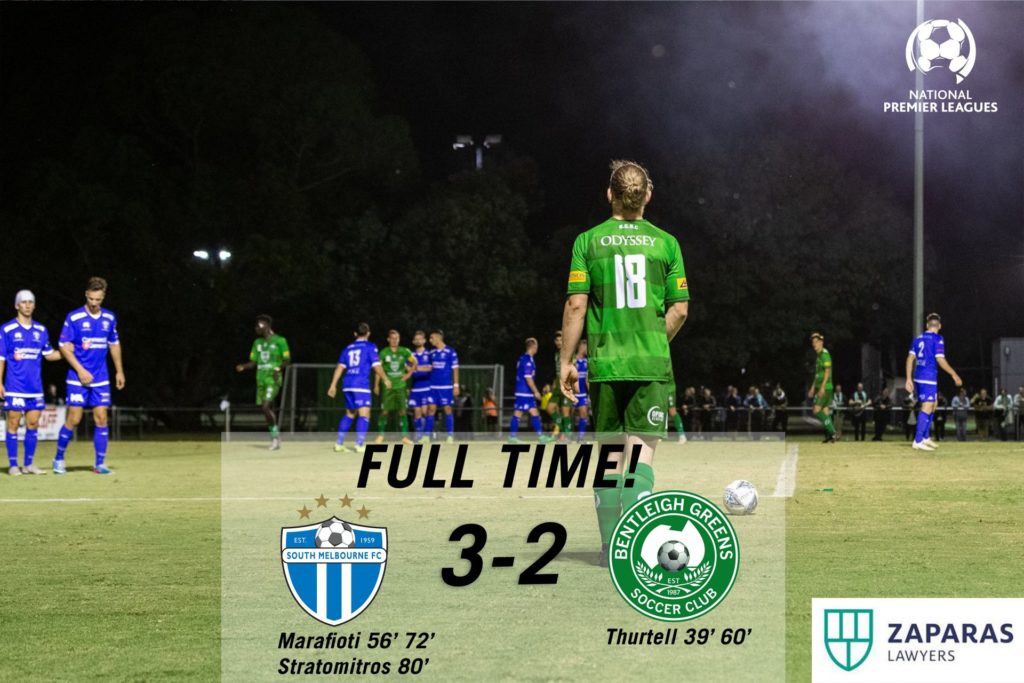 Bentleigh travelled to Lakeside on Sunday night looking to make it 4 straight wins, having beaten Dandenong City, Port Melbourne and Avondale in the previous 3 weeks. The Greens peppered the South goal early with Matt Thurtell putting a volley just wide and Tyson Holmes forcing a great save out of Nikola Roganovic with a 20 yard curling effort destined for the top corner.

South’s first meaningful foray forward resulted in Jacob Alexander picking up a yellow card as he hauled down Zac Bates on halfway.

The Greens broke the deadlock just before half time as Matt Thurtell nudged his header past Roganovic and gave Bentleigh the ascendancy.

On 56 minutes Giuseppe Marafioti restored parity when Gerrie Sylaidos’ effort was deflected into his path and he made no mistake bundling home from 6 yards out. 4 minutes later, Matt Thurtell had his brace when a long ball over the top from defense found its way into his path in behind the South defensive line, he in turn slotted past Roganovic and made it 2-1 to Bentleigh.

On 72 minutes, South once again, found an equaliser. Marafioti cut on to his left foot and fired his shot past Scott and into the back of the net. South were on the front foot on the hunt for a winner and on 80 minutes they got it. From the 2nd phase of a corner the ball fell to Kosta Stratomitros who lashed his effort past a pile of bodies and into the back of the net leaving Scott with no chance. Unfortunately for the Greens they were unable to find a 3rd as South ran out 3-2 winners when the referee blew his whistle to end the game.